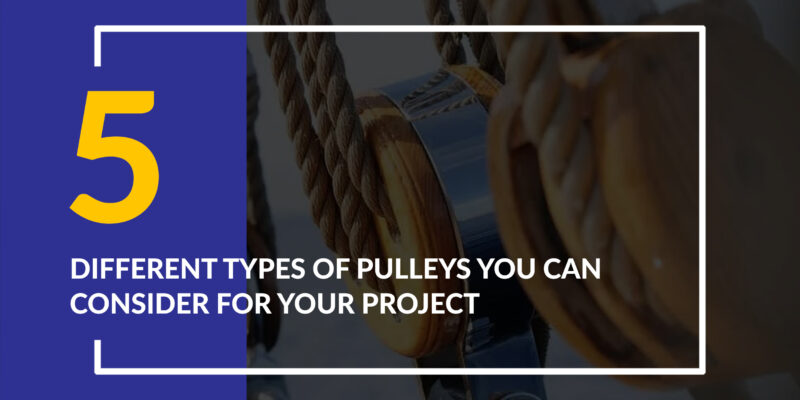 Pulleys are among the most required tools for construction, manufacturing, or any other industry which requires heavy lifting.

As the name suggests, it’s a fixable pulley, which we use by fixing it to a ceiling or a wall. The fixed pulley is fixed throughout the use and is the most common of all the pulleys. In fixed pulleys, the force exerted on the pulling side brings out an equal result on the side that is being pulled. The application of this pulley is used in changing lift or pull direction in a large network of pulleys.

Block and Tackle pulleys are a network of several pulleys, with pulleys being fixed parallel to each other

The Block and Tackle pulleys consist of both fixed and moveable pulleys fixed parallel to each other. Each compound pair of two moveable and fixed pulleys pairs join the other two to form a network of these pulleys. This pulley comes in the use of saving a great amount of work.

Conveyor pulleys are the pulleys used to change the direction of conveyor belts. It’s fixed at the end of the conveyor belts. It consists of locking assemblies and end disks that are flexible. You can’t see this being pulley being used for any other reason.

Cone pulleys consist of a system where several pulleys are placed one above the other. At the topmost level, there is only one pulley. So, the shape of this system resembles a cone. That’s why it’s called Cone Pulleys. This arrangement of pulley wheels makes it easy for the operator to change the direction of the pulley. Cone pulleys work on the same principle a bike with gear works.

You use smaller gears when you want to exert less force, but then it goes only so far. But if you use larger pulleys, it takes you more distance with each revolution.

Cone pulleys are used when there is the possibility of a frequent shift in work demand.

There are many other types of pulleys too which are used in the construction industry or manufacturing industry. But you must choose a pulley which is apt to the use you are going to have.

Once when you choose the type of pulley, please check for the material quality such as rope. Also, you should always take suggestions from some expert on which one is best for the particular project you’re getting it for.

Tags:Pulleys
Why Choose High-Temperature Castors? Are they worth the investment?
Why are caster wheels important?